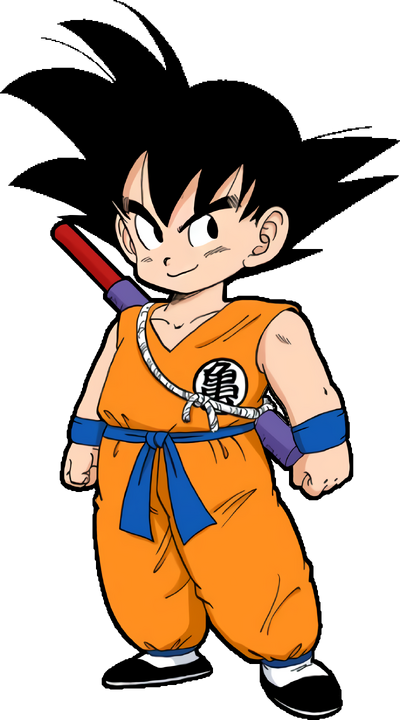 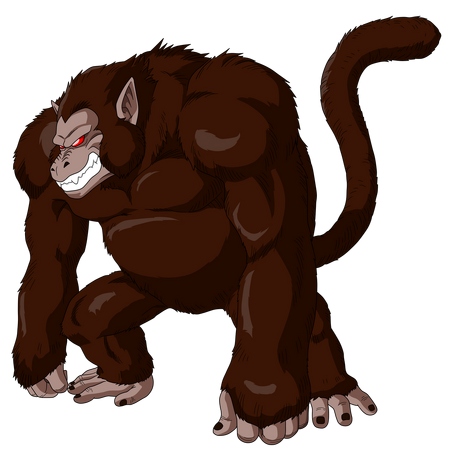 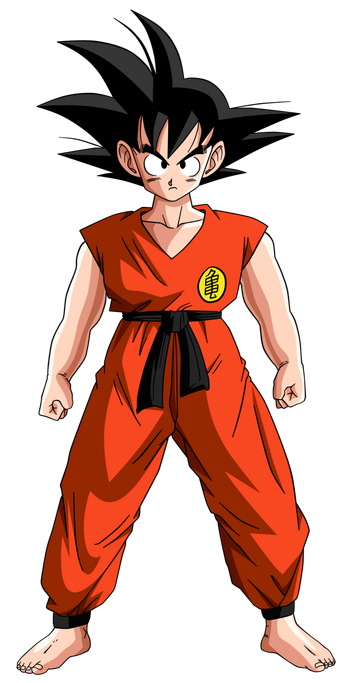 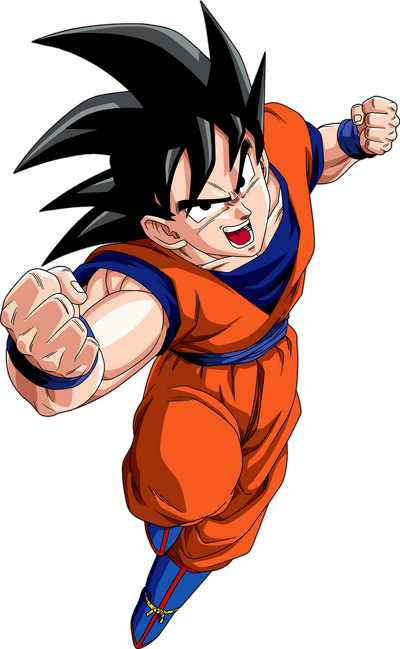 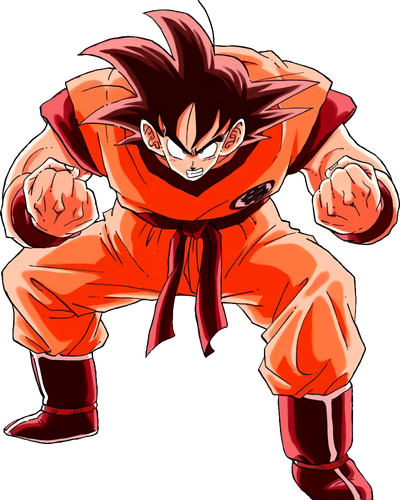 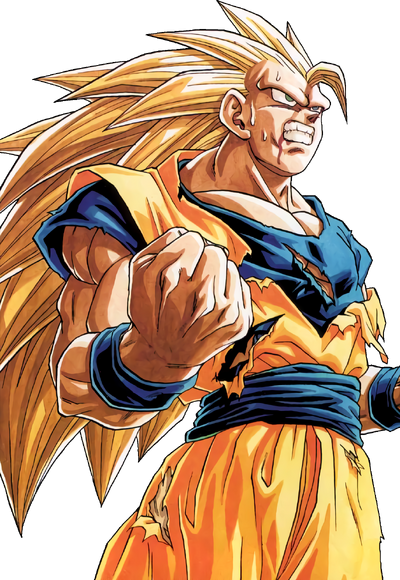 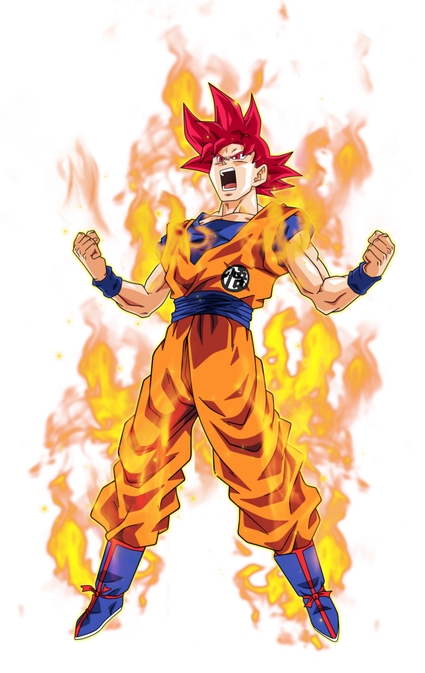 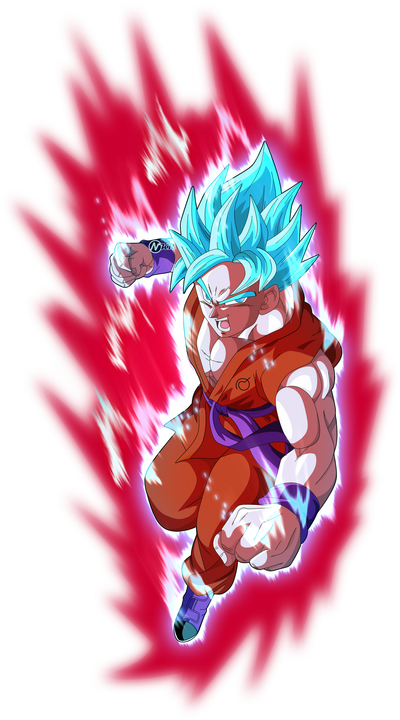 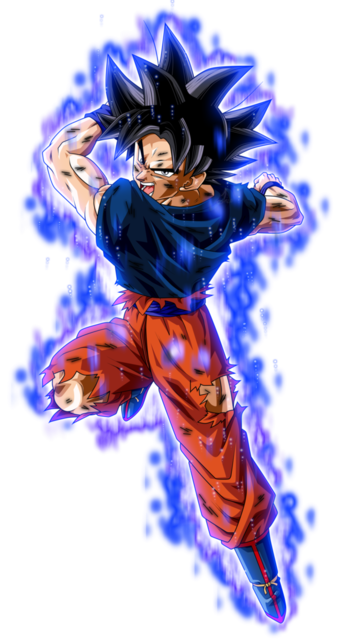 Son Goku is the main protagonist of Dragon Ball. Born on Planet Vegeta, he is sent to Earth for protection from the impending destruction of his home planet. After being found by an old martial artist named Son Gohan, he is trained in martial arts himself. Throughout the years, he has defended the Earth and his universe from countless threats.

Attack Potency: Wall level (Destroyed a car with a Kamehameha), Large Building level in Oozaru form (Completely annihilated a portion of Emperor Pilaf's castle) | Large Building level (Defeated Mercenary Tao, who casually defeated General Blue. General Blue survived his plane crashing into a mountain at full speed), likely higher as an Oozaru | Large Building level | Multi-City Block level (Fought evenly with Tien Shinhan, who destroyed the Budokai tournament arena, which was calced at this) | City level (Defeated King Piccolo, who could destroy an entire city with a wave of his hand) | Moon level (Matched Piccolo Jr., who's explosive wave affected a small continent, should not be that much weaker then his beginning of Sayain Saga self, who should be comparable to Piccolo who destroyed the moon. ) | Planet level (Easily stopped Nappa's attacks, who is far above Raditz. Overpowered Vegeta's Galick Gun with a Kaioken x4 Kamehameha. The Galick Gun in question was meant to destroy Earth.) | Planet level (Easily overpowered the Ginyu Force while holding back. Members such as Recoome were capable of defeating Vegeta at that time. Overpowered Captain Ginyu, forcing him to take Goku's body) | At least Dwarf Star level (Fought Final Form Freiza using less then 50% of his power, who should be far superior to his first form), higher in Kaioken x20, Super Saiyan, and with the Spirit Bomb (Defeated Full Power Frieza, the latter of whom is far superior to his First Form who reaches this level) | At least Dwarf Star level (Much stronger than he was previously, easily blocked Trunks' slashes with his finger before becoming stronger for the confrontation with the androids). Solar System level as a Full Power Super Saiyan (Fought against Perfect Cell and nearly killed him with his Instant Kamehameha) | Solar System level (Superior to SSJ2 Gohan who defeated Cell, the latter of whom stated he was going to destroy the entire Solar System) | Universe level (His fight with Beerus was going to destroy the entire universe. Universe 7 contains more than one universe sized realm.) | Universe level | Universe level

All previous abilities to a greater extent, Non-Physical Interaction (Able to block intangible attacks), Forcefield Creation, Regeneration (Mid-Low, as a Super Saiyan God), Summoning (Can summon Zeno with an item), Precognition (Type 2. Can predict Hit's movements), Resistance to Poison (Via Forcefield Creation), Existence Erasure (Tanked Hakaishin Ki in his base), Time Stop (Repeatedly resisted Hit's attempts to freeze him in time until the latter powered up in SSBKKx10), Empathic Manipulation | All previous abilities to a much greater extent, Reactive Power Level (Goku's attacks were getting stronger, faster and sharper the longer he fights Jiren), Heat Manipulation, Instinctive Reaction | All previous abilities, Paralysis Inducement (Briefly paralyzed Broly in attempt to talk sense into him)

Intelligence: Animalistic as an Oozaru, Below Average socially (Raised in the mountains with his adoptive grandpa before the latter’s death, knows little to nothing about how society functions), Above Average academics wise (While training with Master Roshi he learned about Math & Calculus), Extraordinary Genius combat wise (Copies a kamehameha after seeing it once, which is supposed to take 50 years to learn according to Roshi)

Weaknesses: His durability drops when off guard. Weakened when his tail is grabbed/removed (up to Post Red Ribbon Army). Transforming into an Oozaru makes him berserk for the duration of the form.

Retrieved from "https://debatesjungle.fandom.com/wiki/Son_Goku_(Dragon_Ball)?oldid=96279"
Community content is available under CC-BY-SA unless otherwise noted.